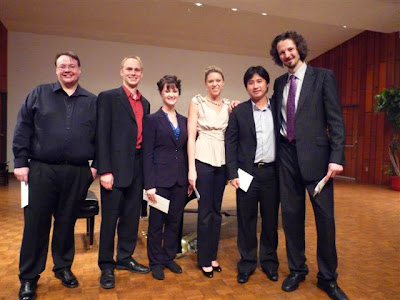 Big thanks to everyone who came out for the Metropolitan Opera National Council Western Canada District Auditions on November 14 at the Vancouver Academy of Music. Thanks to Dawne Dye, former member of the VO Chorus, and the Vancouver Opera Guild for hosting and organizing the event.

It was a toughie, what with so many talented singers!

The 5 winners of the competition are David Gibbons (who won the Encouragement Award), Michael Nyby, Alicia Woynarski, Sylvia Szadovszki, Xiao Dong Zhang and Michael MacKinnon. The winners will share the $4500 prize money which was provided by the Vancouver Opera Guild. The quintet will go onto the Northwest Finals which takes place in Seattle on January 16.

One step closer to landing a coveted spot with the Met! Good luck to everyone in January!

Email ThisBlogThis!Share to TwitterShare to FacebookShare to Pinterest
Labels: Notices